A Day Trip To Stirling 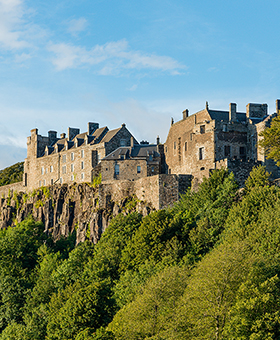 Stirling is a treasure trove of Scottish history. Spending a day here is a challenge only because there is so much good stuff to see and do. If you’re looking to learn more about King Robert the Bruce, this is the perfect place to visit. Here are just a few of the highlights that Stirling has to offer.

At the north end of the city, you’ll see Stirling Castle. You can’t miss it as it sits high above the city on craggy, volcanic rock. Records show that there has been a castle on that spot since the 1100s. The current structure has sections that can be dated to the 1300s, so it really is a slice of history. You can explore the restored rooms, such as the Great Hall and the Chapel Royal. While there, you can learn about all the sieges and royal murders that the castle has witnessed.

In the skyline of Stirling, the National Wallace Monument stands proud and overlooks the site where Scotland was victorious at the Battle of Stirling Bridge. Here you can enjoy stunning views of the city while learning more about the Guardian of Scotland, William Wallace.

The Battle Of Bannockburn Visitor Centre

A couple of miles south of the city centre, you’ll find this award-winning visitor centre. It tells the story of King Robert the Bruce and the famous battle of Bannockburn. This is a proud moment in history where the Scottish defeated the English in battle, despite having a much smaller army.

This art gallery and museum was founded in 1874. Here you can learn about the history of Stirling from pre-historic times through to modern times. There are some wonderful artefacts to explore which bring history to life. You can even get dressed up in traditional costumes.

While you’re there, keep your eyes peeled for Oswald. He’s the gallery’s resident cat and superstar.

The drive to Stirling takes a little over an hour from Killin Highland Lodges. The route is pretty easy to follow along the A85 and the A84. It’s well signposted and easy to find.

Back to Local Area