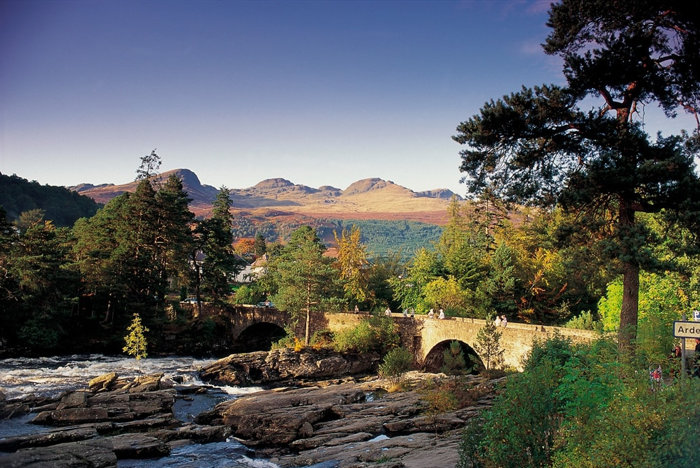 Scotland, and more specifically, Stirling, are home to a variety of water features that attract tourists from near and far. Cascading over the River Dochart at the west end of Loch Tay, the Falls of Dochart are famous white waters that can be admired from the Bridge of Dochart, first constructed in 1760.

Revel in the natural beauty of the famously scenic area and take the time to stop and observe the falls themselves from viewing points on the banks of the river.

For visitors who want to combine a feeling of serenity with adventure, observing the misty falls allows you to witness one of mother nature’s finest accomplishments. Watch as the water tumbles from above, cascading through large rocks and roars down into the river below - film fans amongst us will recognise these charming falls from the 1959 film The 39 Steps, starring Kenneth Moore.

Visit in the winter months for the best and most rambunctious experience. For the history buffs in our midsts, the waterfalls cascade over and around the Islands of Inchbuie, which is most famous for its ancient burial grounds - the Clan Macnab, a Highland Scottish clan that originated as far back as 1100AD.

The islands of Inchbuie are the home of two substantial Iron Age forts and are considered to be a site of special scientific interest because of the whole range of different geomorphological features attached to it. The island itself has been entrusted to the Macnab Memorial Trust since 1987- keeping the burial site in the ownership of the clan itself.

If you’re interested in expanding your knowledge on the area’s vibrant history, then a visit to Breadalbane Folklore Centre may well be of interest. Based in an old mill, the folklore centre hosts a variety of relics and knick-knacks and will provide you with useful information about the local area.

Back to Local Area